The Death of Stalin

There are some movies that one can’t help but wonder why they aren’t more famous. It’s not like fame matters when it comes to cinema, but it is something I’ve never been able to understand. After all, some movies are really more than just a great way to pass the time. They can impact our worldviews, and more importantly, they can help us find the answers to important questions.

This is the case with The Death of Stalin. I might have given it too much thought, but after watching it a couple of times, I can’t help but think that this movie has the answer to why communism cannot work. Yes, you read that correctly. The answer to one of the most important political questions is solved by a comedy that portrays the absurdities of a political system that has literally shaped the past two centuries of human history.

To most people, the concept of communism dates back to Karl Marx and Friederich Engels. However, this might be debatable depending on what one understands by communism. Historically, the underlying ideas can even be traced to some of the world’s most ancient civilizations. This is not surprising if one considers ancient communitarian ideas to be precursors of communism as we now understand it.

But let’s be honest. Communism, as pop culture has come to portray it, refers to a political movement that became very popular throughout the XX century. In a few words, it was the antithesis of capitalism. At the height of the Cold War, the world was divided into two big blocks: one that was led by the United States and its capitalist ideology, and a second one under the Soviet Union and communism.

At the turn of the century, a winner was declared. Capitalism stood out as the system destined to take over the world. Meanwhile, the Soviet Union was undergoing a major crisis. Capitalism, on the contrary, experienced an important expansion. Through a surge in democratic liberalism, the new capitalist ethos was born.

At the end of the 90s, under the discourse of neoliberalism, the world entered a new phase of capitalist growth; one that we are still seeing today, both with its achievements and excesses. Many interpreted this phenomenon, as depicted in the words of Francis Fukuyama, to be the end of history. Capitalism had won, and there was no other alternative.

Much has been debated about these two systems. This comes as no surprise as they seem to encompass a wide array of elements directly related to human existence. The economy, politics, society, psychology, art, culture. Almost every aspect of human life is susceptible to fall under the wide spectrum of capitalism and communism.

The debate around which of these two systems is better seems to never end. Although communism has undergone some major setbacks in our recent history, it always seems to make a comeback. Something similar could be said about capitalism. Although it has played an important role as a major engine of development, it has also brought a number of ailments.

Capitalism, like communism, seems to have also undergone some important crises. We are currently experiencing what is probably its most challenging one. Climate change, a result of capitalism’s excesses, is questioning the very existence of society as we know it.

This back and forth movement between one system and the other has had an important influence on how they are perceived. Every once in a while we tend to forget that communism has some important problems of its own, mainly because capitalism can also let us down. When this last happens, communism experiences a new opportunity. However, we mustn’t forget that communism, at the end of the day, sucks.

The world’s brightest minds wouldn’t be able to answer this question even if they had all the time in the world. Philosophers, economists, and political scientists, among others, have tried in vain.

Explaining such a complex issue is a task that escapes rationality. It is better suited for art. That is why it comes as no surprise that The Death of Stalin is great at explaining why communism sucks.

Communism, as recent history has come to understand it, is a joke. It is very hard to actually think of it as something that could potentially work. Time and time again, history has shown how it fails. Critics of this perspective might argue that part of the reason why communism has not been able to succeed is that capitalism always seems to hinder its performance. This might be true, but it leaves aside the imperfections of communism.

Maybe none of these two systems are suited for the times we are living, and a better system is yet to be seen. We are still somewhere in an interregnum and we don’t know what the next big thing might be. The old cannot die, and the new cannot be born.

Stalin, as many versions of history have come to portray him, seems to have been a despicable individual. And yet, somehow, he was able to become the leader of the Soviet Union. This says much about him as it does about the Soviet Union. After all, organizations are strongly influenced by their leaders. 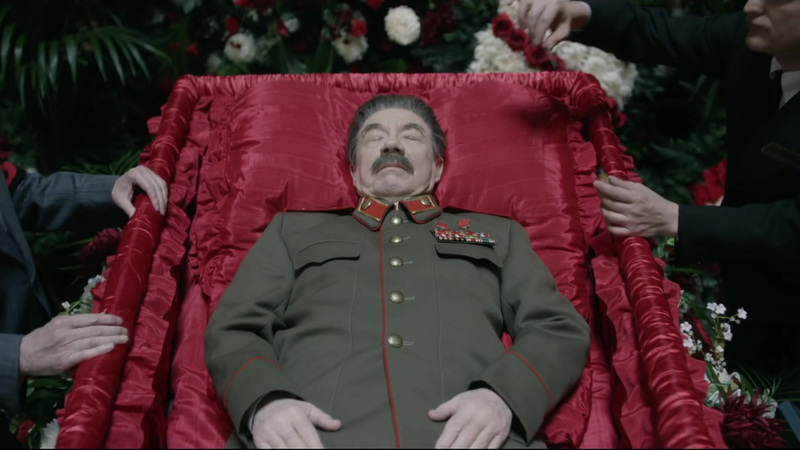 It is hard to defend his achievements as the head of such an important political entity. Many died and were tortured, and people lived under the constant fear of an evil state. Although a comedy, The Death of Stalin perfectly portrays this. The movie might seem like an exaggeration of his incompetence, but I like to think that there was some truth to this portrait of him.

Go see The Death of Stalin. It is capable of portraying his ineptitude, and most importantly, why communism sucks.

« First Reformed » The Man in the High Castle »