The typical story of a soccer player discovered by chance, rising to the top, and then falling into disgrace, sounds more like a tragedy than a comedy. However, Rudo y Cursi manages to use this formula to build one fun-watching movie that will keep you laughing.

If you are not familiar with the work of Mexican director Carlos Cuarón, or of actors Gael García Bernal and Diego Luna, this movie is definitely one you should watch.

The Case for Soccer

Rudo y Cursi takes place in Mexico, but it might as well occur in any other country where soccer is a top sport. I’m not really a big fan of soccer, but there is one thing that has always made me curious about it: the passion it awakens in its followers.

It is amazing, to say the least, to see how soccer fans follow their teams. Soccer fans take the sport and their role in it very seriously. To them, a team represents more than just a team. I dare to say say that, to many, it is even more important than their religion, and, why not, it becomes a religion itself.

This isn’t something specific to a particular continent. One can find numerous examples of cases where soccer fans take their fandom to extremes. In a way, this phenomenon speaks strongly of human nature and its connection to sports.

Soccer Isn’t Only About the Sport

Like any other sport, soccer isn’t only about the sport itself. There is much more than a bunch of people running after a ball. There is also an emotional component to it. After all, players are human beings, and they have lives that occur outside the field.

This is one of the most interesting things about Rudo y Cursi. The movie is able to address this topic in a very creative way, portraying how the life of a Mexican soccer player can be.

Coming from a poor town in the middle of nowhere, two brothers, nicknamed Rudo and Cursi, respectively interpreted by Diego Luna and Gael García Bernal, get to play professionally in the Mexican league. It all starts after being serendipitously discovered by a sports agent who constantly on the hunt for new talents.

As one might expect from a movie, for two young men coming from a humble background, suddenly being able to buy whatever they want, attending parties, experiencing the big city for the first time, there is much that can go wrong. At moments, one does not know if what happens in the movie is way too surreal, or just a portrait that truly depicts reality. 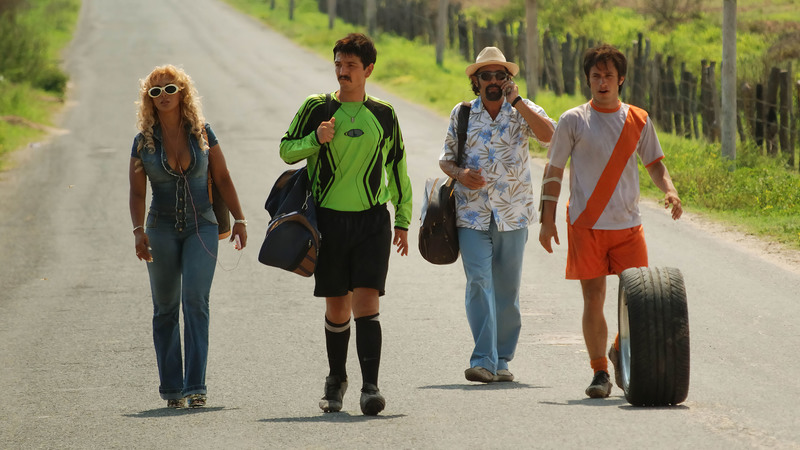 The Social and Political Aspects of Soccer

When it comes to social and political aspects, there is much that happens around any sport. In Rudo y Cursi this is seen clearly throughout the movie. The humble origin of the two protagonists is something that never really goes away, to the point that it sometimes even becomes uncomfortable, without stopping to be funny. It is a reminder that, for many, sports is the only way to move up the socio-economic ladder.

The movie is just brilliant when it comes to discussing topics like fame, money, celebrities, and even drug trafficking. The characters of Rudo and Cursi are constantly dealing with situation after situation, each more bizarre than the other, but real nonetheless. As a matter of fact, the movie is so real that it even discusses the issue of violence that is sadly seen in the world of sports.

Probably the most interesting topic discussed in Rudo y Cursi is the relationship of the two brothers. Throughout the movie, they are constantly undergoing a love-hate relationship, but at the same time, it is this relationship that keeps them going.

Although they seem to hate each other at moments, they also acknowledge each other to be family, something that is highly valued in Latin American culture in general. This is probably the most interesting thing about the movie because it reminds us that, even when we are in different teams, we are all part of the same sport.

Go watch Rudo y Cursi and give yourself a treat with some fine piece of Mexican comedy.